What the Actual Fascism, America?! 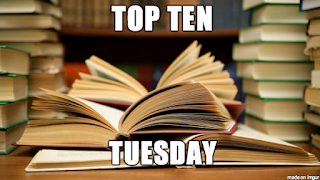 We are living in a surreal point in time where Donald Trump/ Drumph could actually become president. I was all reared up to go on a rant about how Trump’s success is the result of the American government ignoring their lacklustre school system (resulting in churning out politically ignorant voters???) plus the general negative political climate in their country where people are feeling powerless and consequently supporting an ignorant, bigoted, megalomaniac bully for the Republican nominee.

But then I watched a segment on Full Frontal with Samantha Bee [click here] wherein she interviews a group of “multi-ethnic” “bi-partisan” “college educated” “Trump supporters” and I was left speechless. And with a sick feeling in my stomach, similar, I'm sure, to what the countries bordering Germany and Italy felt like a few years before WWII. (I’m writing this from Canada, btw.)

What does this have to do with The Broke and Bookish’s weekly meme: Top Ten Tuesday? Well, dear reader, because of this American craziness, all of a sudden those of us that majored in History, English, or even Political Theory (totally a thing!) finally feel relevant in today’s society, and can actually use our over-priced knowledge-base(s) in everyday conversation! THEREFORE, as this week’s Top Ten Tuesday is a freebie, and I'm a fan of The Dystopian Novel, I choose to vent about Donald Trump [and his supporters], using my strengths of being an über-reader and professional metaphorist.*

Top Ten Dystopian Novels That Will Change From Cautionary Possibilities to Ominous Inevitabilities* if Trump Becomes President of the United States of America.

Note: A dystopia is a community or society that is undesirable or frightening.[2][3] It is translated as "not-good place," an antonym of utopia, … "Utopia" is the blueprint for an ideal society with no crime or poverty. Dystopias are often characterized by dehumanization,[2] totalitarian governments, environmental disaster,[3] or other characteristics associated with a cataclysmic decline in society. Dystopian societies appear in many subgenres of fiction and are often used to draw attention to real-world issues regarding society, environment, politics, economics, religion, psychology, ethics, science, and/or technology, which if unaddressed could potentially lead to such a dystopia-like condition.

[Please feel free to play DysTrumpia*: The Matching Game, where you match a sound-byte/ quote from Trump with the aforementioned “real-world issues,” noting how each example gets scarier and scarier the more matches you make. For older players: take a shot (of alcohol) with each match!]

I was going to explain each pick, but their synopses pretty much say it all.

1.1984, George Orwell
The year 1984 has come and gone, but George Orwell's prophetic, nightmarish vision in 1949 of the world we were becoming is timelier than ever. 1984 is still the great modern classic of "negative utopia" -a startlingly original and haunting novel that creates an imaginary world that is completely convincing, from the first sentence to the last four words. No one can deny the novel's hold on the imaginations of whole generations, or the power of its admonitions -a power that seems to grow, not lessen, with the passage of time.

2. Chrysalids, John Wyndham
John Wyndham takes the reader into the anguished heart of a community where the chances of breeding true are less than fifty per cent and where deviations are rooted out and destroyed as offences and abominations.

3. Brave New World, Aldous Huxley
Far in the future, the World Controllers have created the ideal society. Through clever use of genetic engineering, brainwashing and recreational sex and drugs, all its members are happy consumers. Bernard Marx seems alone harbouring an ill-defined longing to break free. A visit to one of the few remaining Savage Reservations, where the old, imperfect life still continues, may be the cure for his distress...

4. Fahrenheit 451, Ray Bradbury
The terrifyingly prophetic novel of a post-literate future.
Guy Montag is a fireman. His job is to burn books, which are forbidden, being the source of all discord and unhappiness.

The classic dystopian novel of a post-literate future, Fahrenheit 451 stands alongside Orwell’s 1984 and Huxley’s Brave New World as a prophetic account of Western civilization’s enslavement by the media, drugs and conformity.

5. A Clockwork Orange, Anthony Burgess
In Anthony Burgess's nightmare vision of the future, where criminals take over after dark, the story is told by the central character, Alex, who talks in a brutal invented slang that brilliantly renders his and his friends' social pathology. A Clockwork Orange is a frightening fable about good and evil, and the meaning of human freedom. When the state undertakes to reform Alex—to "redeem" him—the novel asks, "At what cost?"

6. The Handmaid’s Tale, Margaret Atwood
Offred is a Handmaid in the Republic of Gilead. She may leave the home of the Commander and his wife once a day to walk to food markets whose signs are now pictures instead of words because women are no longer allowed to read. She must lie on her back once a month and pray that the Commander makes her pregnant, because in an age of declining births, Offred and the other Handmaids are valued only if their ovaries are viable. Offred can remember the years before, when she lived and made love with her husband, Luke; when she played with and protected her daughter; when she had a job, money of her own, and access to knowledge. But all of that is gone now...

7. Children of Men, P.D. James
Told with P. D. James's trademark suspense, insightful characterization, and riveting storytelling, The Children of Men is a story of a world with no children and no future. The human race has become infertile, and the last generation to be born is now adult. Civilization itself is crumbling as suicide and despair become commonplace. Oxford historian Theodore Faron, apathetic toward a future without a future, spends most of his time reminiscing. Then he is approached by Julian, a bright, attractive woman who wants him to help get her an audience with his cousin, the powerful Warden of England. She and her band of unlikely revolutionaries may just awaken his desire to live . . . and they may also hold the key to survival for the human race.

The nation of Panem, formed from a post-apocalyptic North America, is a country that consists of a wealthy Capitol region surrounded by 12 poorer districts. Early in its history, a rebellion led by a 13th district against the Capitol resulted in its destruction and the creation of an annual televised event known as the Hunger Games. In punishment, and as a reminder of the power and grace of the Capitol, each district must yield one boy and one girl between the ages of 12 and 18 through a lottery system to participate in the games. The 'tributes' are chosen during the annual Reaping and are forced to fight to the death, leaving only one survivor to claim victory.
Yadda yadda, BUT THERE WILL BE NO KATNISS IN A TRUMP FUTURE.

9. The Road, Cormac McCarthy
A father and his son walk alone through burned America. Nothing moves in the ravaged landscape save the ash on the wind. It is cold enough to crack stones, and when the snow falls it is gray. The sky is dark. Their destination is the coast, although they don’t know what, if anything, awaits them there. They have nothing; just a pistol to defend themselves against the lawless bands that stalk the road, the clothes they are wearing, a cart of scavenged food—and each other.

10. World War Z: An Oral History of the Zombie War, Max Brooks
Blah blah blah.
... Most of all, the book captures with haunting immediacy the human dimension of this epochal event. Facing the often raw and vivid nature of these personal accounts requires a degree of courage on the part of the reader, but the effort is invaluable because, as Mr. Brooks says in his introduction, "By excluding the human factor, aren't we risking the kind of personal detachment from history that may, heaven forbid, lead us one day to repeat it? And in the end, isn't the human factor the only true difference between us and the enemy we now refer to as 'the living dead'?"
There's a much longer synopsis to this plot, but I basically just wanted to add a ZOMBIE APOCALYPSE to the list of things to come with President Trump.

I feel like I may possibly be reaching a bit with that last one, but not by much!
I am not a political person, by any means, and I'm the first to admit I get all (and I mean ALL) of my world news from cable TV shows like This Week Tonight, and The Daily Show. Even The Tonight Show. And I can say, in all my ignorant honesty, that I'm in a state of shock/ paralyzed terror the more territory Trump gains. We've stopped laughing, basically.

I realize this is a bit of a random and unexpected TTT, (especially from a Canadian!), but seriously. SERIOUSLY. Sh*t is getting real, people!

Thoughts? Political leanings? Readying your guest room for the mass exodus from America? I mean, talk about refugees!!!!! (Kidding?)

As always, thanks for reading! 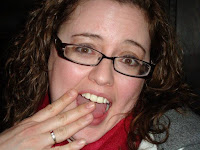 Email ThisBlogThis!Share to TwitterShare to FacebookShare to Pinterest
Labels: She Be Bloggin', Top Tens