"Vanessa Michael Munroe, chameleon and information hunter, has a reputation for getting things done: dangerous and not quite legal things that have taken her undercover into some of the world’s deadliest places. Still healing from a Somali hijacking gone wrong and a brutal attack that left her near death, Munroe joins her lover, Miles Bradford, in Japan where he’s working as a security consultant protecting high-value technology from industrial espionage. In the domesticity of their routine she finds long sought-after peace—until Bradford is arrested for murder, and the same interests who targeted him come after her, too.
Searching for answers and fighting to stay alive, Munroe will soon discover how far she’ll go to save Bradford from spending the next twenty years in locked-up isolation; how many laws she’ll break when the truth seems worse than his lies; and who to trust and who she must kill. Because she’s a strategist and hunter with a predator’s instincts, and the man she loves has just stabbed her in the back.
With break-neck pacing, incendiary prose, and an unforgettable cast of characters, The Mask features Vanessa Michael Munroe: a brilliant, lethal heroine who will stop at nothing to find the truth, no matter what it may cost."


I am trying really hard not to call Vanessa Michael Munroe a female Jason Bourne (Jocelyn Bourne?), but that is what she is, but like, times ten. Thousand. Times ten thousand.

When I read this action-packed suspense/ thriller/ mystery, I had no idea it was part of a series until the character made reference to certain critical events in her past. I know that some reviewers found this confusing, but I thought Taylor Stevens made everything flow together fairly seamlessly, and the references to Vanessa’s past explained certain motivations and actions she took.


I love how Stevens presented the timeline for The Mask. The opening scene is a pretty kick-ass fight scene, which actually takes place in the middle(ish) of the story. That in-of-itself is not unusual, but the fact that Vanessa has a 30-day deadline to prove her friend (and lover) Miles’ innocence adds to the suspense; by merely naming a chapter “Day 27” we know that time is running out without explicitly drawing attention to the fact.


Initially I found Vanessa Munroe to be a bit overly dramatic, or perhaps the author to be heavy-handed:

(Day 2)
… She searched for the killer among them, the liar, the thief, who’d reached a fist into her heart of happiness and ripped it, beating, from her chest.


But once you keep reading, and more backstory is revealed, you realize why she is a woman of such extremes. The numerous allusions to having been physically and emotionally abused when younger, turning her into a survivalist, made certain reactions more plausible and understandable. It is also the reason why she is better than Jason Bourne; he automatically knows how to fight opponents, she learned by surviving brutal conditions from a young age, and calls on those memories when she fights. (Sorry, Jason. I’m sure your life was hard, too.)


In Munroe’s current predicament (not only had Miles been arrested for murder, he had been lying to Munroe about the surrounding circumstances), she realizes that “victimhood was unbecoming,” and asks for payment from the security firm that Miles worked for to solve his blatantly wrongful conviction. This seemingly cold-blooded move was how she could leave her feelings out of the equation so as not to be blinded, and to give her full attention to the task at hand.

“The moment the payment hit her account, the apex predator would rise from hibernation.”


I love Stevens’ writing style, and her very observant details, not only in fight scenes, but when describing everyday Japan. Phrases such as: “… less of the city’s sense-dulling fragrance” or “… lies behind the mask, now just more details rearranged in the maddening clarity of hindsight.” Which, when you read the backstory of Taylor Stevens, makes you wonder if that’s how she perceives the modern world. [Take a moment to read about the author at the end of this review. I’ll wait…
...
...


Okay, right?! Stevens would have a completely different perspective as to the motivations of characters that she may have observed in her actual life once she was able to join mainstream society! I know… it blew my mind as well. You’re welcome.]


Another cool aspect to Vanessa Michael Munroe is that she has a male alter-ego (Michael Munroe), an identity she takes on to gain access to the mysterious bio-tech company and solve not one, but two murders. I also love that when we revisit the opening scene, it’s actually “Michael Munroe” that takes on the local thugs, not, as was previously assumed, a “woman” fighting four attackers.

I think my absolute favourite part of this entire book [SPOILER!] is that there’s no big reveal that Michael Munroe was ACTUALLY A WOMAN! She is purely a warrior, kills with skill, strength, and gory, gory violence, and the bad guys never “discover” that it was a woman who bested them!!

Vanessa Michael Munroe is a crazy awesome action hero, coming to the big screen soon (so I hear!). And not a moment too soon!!

TAYLOR STEVENS is the award-winning New York Times bestselling author of The Informationist, The Innocent, The Doll, The Catch, and the novella The Vessel. The series featuring Vanessa Michael Munroe has received critical acclaim and the books are published in twenty languages. The Informationist has been optioned for film by James Cameron’s production company, Lightstorm Entertainment. Born in New York State, and into the Children of God, raised in communes across the globe and denied an education beyond sixth grade, Stevens was in her twenties when she broke free to follow hope and a vague idea of what possibilities lay beyond. She now lives in Texas, and is at work on the next Munroe novel.
*I received this book from the Blogging for Books program in exchange for this honest review.*

The pain was instant and calming: partial relief to the addict’s need, methadone in place of heroine, pathway to clarity. (246)

The fight called to her, compelling her toward the rush where time separated from reality and hurt ceased to exist because all that mattered from one heartbeat to the next was whatever it took to stay alive. (248)

Soundtrack for the end fighting scenes: "Get Free" by The Vines 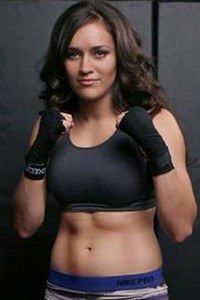 Mainly because I had never heard the term Apex Predator and she came up when I googled the phrase. But I think it works!! Hey, if Gina Carano can make the jump...